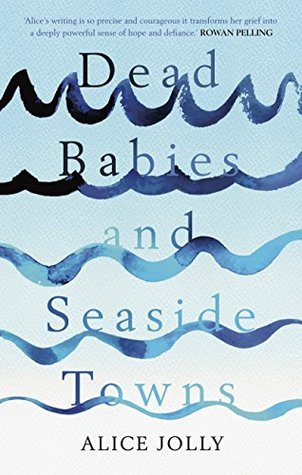 Dead Babies and Seaside Towns is a fantastic, tragic, hopeful memoir by still-birth survivor Alice Jolly, who writes honestly and movingly about her grief for her ‘five dead babies’.

Jolly does not hold back in describing her experiences, first with her still-born baby daughter, and later, the other ‘dead babies’ that she miscarries. She describes how she becomes touched by death, feeling as the ‘Spectre at the Feast’. The silence of friends, ignoring and even avoiding the tragic couple. She is harshly critical of IVF, I was pleased to see, as a money making industry giving false hope to childless, desperate couples in their early forties.

Her self-deprecating sense of humour saves the book from slipping into the maudlin, with sentences that had me laughing through the tears. My favourite: ‘On death certificates it says – cancer, stroke, heart attack. It never says – she opened the fridge and, yet again when confronted with the task of turning four sausages and a lump of cheddar into a tasty family meal, she simply lay down and died’.

It helps that she is also a terrific writer, with near perfect prose and beautiful descriptive passages of coastal Britain.  I enjoyed her paragraphs on writing as craft (whether discussing the form of a novel or a memoir – her fears of writing memoir as Me, Me, Me, Moi, Moi, Moi). And her clever use of repetition – the book as an echo chamber – to describe the way life passes by ‘I put the washing machine on, load the dishwasher, hang clothes on the line, write a short story, wipe my son’s nose’).

As well as describing the world of surrogacy, she provides little insights on motherhood, female friendship, writing and faith that rang true. I loved this book, and literally could not put it down.